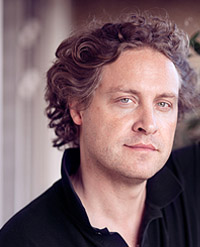 Arnaud Bernard is considered one of the most exciting stage directors in Europe, he combines the visions of the composer with modern aspects, in a perfect symbiosis.  Mr Bernard began his musical career as a Violinist in the Philharmonic Orchestra in Strasbourg. He then swamped his violin for the Stage Directing career in 1988 and began as the assistant to the renowned Nicolas Joël. Mr Bernard staged more than 35 revivals of Mr Joël’s productions all over the world, including Romeo et Juliette at the Royal Opera House-Covent Garden and Lucia di Lamermoor at the Metropolitan Opera.

After his appointment as Associate Stage Director and Production Manager at the Théâtre du Capitole in Toulouse in 1996, he made his personal debut as Stage director, at the age of 29, with a highly acclaimed Falstaff for the Spoleto Festival in Charleston, SC., followed by Il Trovatore in Toulouse and a new production of Il Barbiere di Siviglia, Gounod’s Roméo et Juliette for the Chicago Lyric Opera with Roberto Alagna and Angela Gheorghiu in the leading roles. His successes include a new production of L’Elisir d’amore at the Théâtre du Capitole in Toulouse for the debut of Marcelo Alvarez in the role of Nemorino, a new production of Meyerbeer’s Les Huguenots for the summer Festival in Martina Franca, Italy. A new production of Lakmé (revival in Tokyo and Philadelphia) for the Teatro Massimo in Palermo, Werther for Martina Franca, Roméo et Juliette in Tokyo, Die Lustigen Weiber von Windsor in Nantes and Angers, a new Bohème in Sao Paulo, I Capuleti e i Montecchi in Verona, in Oviedo, at La Fenice and at the Royal Opera house in Muscat (Oman). A new Traviata in Seoul (KNO), different new productions of Romeo et Juliette in Liège, at Novaya Opera in Moscow and in in Hong-Kong, Manon in Lausanne Opera and Monte-Carlo,  Tosca in Prag (ND) and many more.

Arnaud Bernard has had 9 nominations at The Golden Masks Festival in Moscow for La Juive and la Bohème. He has been the youngest stage director ever who worked at the Arena de Verona with his production of La Bohème created in 2005 revived in 2007 and 2011.

Mr Bernard is currently staging a new production of I Vespri Siciliani at the Mariinsky Theatre, opening on March 17th with Maestro Gergiev conducting; while already preparing a new Nabucco for Arena di Verona for Summer 2017. Some future plans include a new production of Simon Boccanegra in Lausanne and Riga, Manon in Bilbao, Queen of Spades in Oslo, Madama Butterfly in Moscow and Carmen in Helsinki.