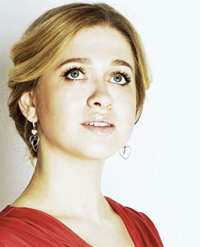 The young coloratura-soprano Daria Terekhova finished her education in 2012 at the Moscow University of Theatre and Arts whilst already performing at the Stanislavsky and Nemirovich Danchenko Theatre in Moscow since 2010. In addition to her outstanding acting ability, Ms Terekhova is acclaimed for her beautiful voice and technique, which made it possible for her to sing a vast range of repertoire including:

Some recent successes include Lucia in Lucia di Lammermoor in Moscow, Konstanze in Entführung aus dem Serail in Brucknerhaus Linz, Olympia in Les Contes d’Hoffmann in NCPA Beijing, and the role debut as Biondetta in The Devil In Love which was conducted by Vladimir Jurowski, for which she received numerous significant nominations in Russia.