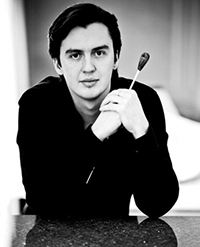 Denis Vlasenko is rapidly emerging as one of the brightest Russian conductors of his generation. He began his education at the Moscow Chorus Academy, followed by the Moscow State Conservatory, finalizing his studies at the St. Petersburg State Conservatory under Alexander Titov. In 2005 he was appointed Assistant Conductor to Vladimir Spivakov at the National Philharmonic Orchestra of Russia. He then worked at the “Novaya Opera” in Moscow. Subsequently he was appointed Permanent Conductor at the “New Russia State Symphony Orchestra” at the invitation of Maestro Yuri Bashmet. He is working regularly with many great artists, such as: Yuri Bashmet, Vadim Repin, Denis Matsuev, Boris Berezovky, Sergey Krylov, Maria Guleghina, Dmitry Korchak and many others.

Recent successes include: “Turandot” at the Teatro Petruzzelli in Bari, “La Traviata” at the Palacio de Bellas Artes in Mexico City, “Eugeny Onegin” at the Latvian National Opera in Riga and V Sochi International Festival of Arts, successful debut at the prestigious music Festival “Crescendo”, Spanish debut with “Lucia di Lammermoor”, Verdi Gala of Maria Guleghina at Great Hall of Moscow Conservatory. In 2014 he made his company debut with the Japan Opera Foundation of Tokyo conducting “Le Comte Ory” by Rossini and in 2015 he returned to the podium of the famous Rossini Opera Festival to conduct “L`inganno Felice” directed by Graham Vick.

His recent successes include various concerts and Opera performances in Russia, such as a concert with Lucas Debargue; principle conductor of the popular Russian TV Show “Bolshaya Opera” on Chanel Kultura; debut with the Muenster Symphony as well as with Orchestra Filarmonica Arturo Toscanini. He has also conducted all the concerts of Maria Guleghina’s Tour throughout Russia as well as concerts of Anna Netrebko and Yusif Eyvazov in Madrid and Barcelona.