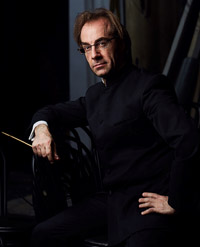 Some recent highlights include the opening of Tosca and La Boheme at  the Puccini Festival in Torre del Lago, season opening of Teatro Communal di Bologna with Turandot, performances of Bob Wilson’s Aida at the Teatro dell’Opera di Roma, concerts with the Aarhus Symphony Orchestra, the Belgrade Radio Symphony Orchestra, the Czech National Orchestra, the Symphony Orchestra of the Bolshoi Theatre in Moscow, the Bruckner Orchester Linz, the Budapest MAV Symphony Orchestra (in Vienna’s Musikverein, and the Thüringer Symphoniker in Rudolstadt. At the Banská Bystrica State Opera he recently opened a new production of Tosca, while for his own “Opera Vsem” festival in St Petersburg he conducted Borodin’s “Price Igor”, and  “Le Nozze di Figaro”. Debut at the Sejong Center for the Performing Arts in Seoul, at the Summer Opera Festival in Busan.

Some upcoming engagements include various opera performances at the  Festivals in Arena di Verona, Torre del Lago, Concerts at the Züricher Tonhalle, as well as performances of Lucia Di Lammermoor at the Novaya Opera and i Vespri Siciliani at the Mariinsky Theatre.