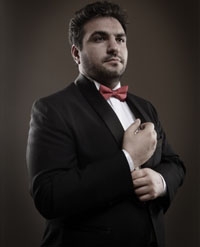 The young Armenian Tenor, critically acclaimed as “the whole package of a true dramatic tenor”, “outstanding Don Carlo”, has often performed under the baton of Maestro Valery Gergiev, and had the pleasure to work frequently with such legends as Maria Guleghina, Anna Netrebko, Olga Borodina, Ekaterina Semenchuk, Hui He, and many others.
Hovhannes Ayvazyan performed Mozart’s Requiem at the Musikverein in Vienna, an Opera Gala at Geneva’s Victoria Hall, various performances at the Yerevan Opera House as Canio, Turiddu, Don Jose, Radames and Pinkerton, as well as many title roles at the Mariinsky Theatre including Don Carlo, Manrico and Cavaradossi. He was on tour with the Berliner Symphoniker under Maestro Lior Shambadal for which he received outstanding reviews and performed Don Jose in Carmen with the Moscow State Opera at the BGE Theatre in Dublin.