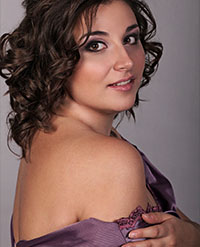 The winner of various prestigious interna-tional awards, the young lirico spinto Irina Churilova emerged as the leading soprano at the NOVAT Opera Theater in Novosibirsk. Since her debut in 2013 as Marguerite in a new production of Faust under the baton of Maestro Valery Gergiev, she is a permanent guest soloist at the Mariinsky Theatre in St Petersburg and since her debut in 2014 also at the Bolshoi Theatre in Moscow.

Her repertoire includes Tatiana in Eugene Onegin, Liza in The Queen of Spades, the title roles in Iolanta and Aida, Amelia in Simon Boccanegra, Amelia in Un Ballo in Maschera, Zemfira in Aleko, Elisabetta in Don Carlos, Leonora in Il Trovatore, Liu in Turandot, Fevronia in The Tale of the Invisible city of Kitezh, Tsaritsa Militrisa in The tale of Tsar Saltan, Urusova in Boyarina Morozova, Katya in The Passenger, Marguerite in Faust, Micaëla in Carmen, Mimì, Musette in La Bohème, Nedda in I Pagliacci, Gerda in The Story of Kai and Gerda and Bernstein’s Mass, as well as chamber repertoire such as Shostakovich’s Seven Romances on Poems of Alexander Blok, Mussorgsky’s The Nursery, Respighi’s Il tramonto, and a solo part in Britten’s War Requiem.

Ms Churilova made her stage debuts in Teatre Liceu in Barcelona and the Teatro Real in Madrid upon a personal invitation of Monserrat Caballe in tribute concerts dedicated to the grand opera diva. With the ensemble of the Novosibirsk Opera and the Mariinsky Theatre, she toured in Japan, South Korea, Thailand and Baden Baden.

Ms Churilova’s recent successes include the title role of Norma at the Opera Graz, Aida in Arena Di Verona, Elisabetta in Don Carlos, Liu in Turandot, Marguerite in Faust, Amelia in Simon Boccanegra at the Mariinsky Theatre as well as a Gala Concert at the Deutsche Oper Berlin dedicated to Giuseppe Verdi under the baton of Paolo Arrivabeni, Lisa in Pique Dame at the Savonlinna Festival, Norma in Santiago de Chile in a new production by Francesco Zambello, and Iolanta with Maestro Gergiev in Munich, Paris and Berlin. Her most recent success was as Amelia in Un Ballo in Maschera at Teatro Regio di Parma, at the Grand Theatre de Geneve and at the Deutsche Oper Berlin

Some upcoming engagements include many role debuts, such as Leonora in La Forza del Destino, Donna Anna in Don Giovanni in Frankfurt and the title role in La Gioconda at the Deutsche Oper Berlin.