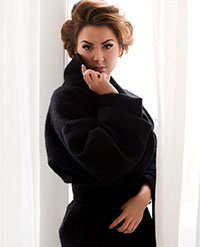 The young Croatian soprano Lana Kos is rapidly becoming high in demand not only due to her powerful and rich voice which easily embraces three-octaves,  but also due to her natural beauty as well as dominating stage presence. Since her stage debut in 2002 as Queen of the Night in Die Zauberflöte, while still only 17 years old, and after being discovered by the great Mstislav Rostropovich for a new production of War an Peace at the Bolshoi Theatre where she portrayed the role of Natasha Rostova, she became a welcome guest at various opera theatres all over the world.

In 2006, as the youngest ever soloist, she was offered a four-year engagement at the Bayerische Staatsoper in Munich. Once there, she interpreted many roles in several languages and was given the opportunity to work with world renowned conductors such as Kent Nagano, Marco Armiliato, Nicola Luisotti, Julian Kovachev, Fabio Luisi, Kirill Petrenko, Danielle Gatti and many others.

The turning point of her career was her debut at the Arena di Verona in 2011 as Violetta in La Traviata under the Baton of Carlo Rizzi in a beautiful production by Hugo de Ana in Summer 2011, In 2013 she returned to Arena di Verona once again with La Traviata under the Baton of Andrea Battistoni. Following those successes she was numerously invited to perform in various Italian Opera Houses such as Teatro Massimo di Palermo, Teatro San Carlo in Genova, Teatro Lirico di Cagliari, Teatro Verdi di Trieste. She numerously returned to perform in Israel at the Masada Festival and in Tel Aviv, she frequently performed in China under the Baton of Daniel Oren, in Brazil and of course in Croatia. Some of her highlights from the past include various performances in leading roles in La Traviata, La Boheme, Romeo et Juliette, Lucia di Lammermoor, Manon Lescaut, Carmen, Otello, “Příhodi liški Bistrouški”, “Il viaggio a Reims”, etc.

After her tremendous success as Luisa Miller at Opera Lausanne she was invited to sing the title role at the Teatro Real Madrid beside Leo Nucci and under the baton of James Conlon, another turning point of her career where it became clear that Lana Kos is on her way to become a significant Verdian soprano.

Her most recent successes include performances of Il Trovatore in Seoul, Belgrad, Graz and Bern, as well as Faust in Vilnius Opera, Turandot (Liu) in Macau and La Traviata at the Teatro San Carlo in Genova.

Her upcoming engagements include performances of Turandot where she will portray the role of Liu in Torre del Lago, Hong Kong and at the Savonlinna Festival in Finland as well as La Traviata at Teatro Petruzzeli in Bari and in Teatro Real Madrid,  La Boheme in Napoli, Simon Boccanegra in Genova, her long awaited debut as Elisabetta in Don Carlo in Zagreb, Madama Butterfly in Bern and many more.