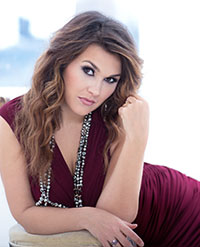 Olga Peretyatko, one of the most soughtafter sopranos today, started her musical career at the age of 15, singing in the children’s choir of the Mariinsky Theatre. She completed a course as a choirmaster and then enrolled to study singing at the Hanns Eisler-Hochschule für Musik in Berlin. She competed and won various prestigious awards in international Competitions and went on to perform at the Deutsche Oper Berlin, the Berlin and Munich state operas, the Théâtre des Champs-Elysées in Paris, La Fenice in
Venice, at the Rossini Opera Festival in Pesaro , and at the Festival La Folle journée de Nantes.

Olga’s most recent successes include the debuts at the Vienna State Opera (I Puritani), Zurich Opera House, the Berlin State Opera and La Scala in Milan (Marfa in Tsar’s Bride, Rossini’s Otello), performances at the Deutsche Oper Berlin (Adina in L’elisir d’amore), and her outstanding debut at the Metropolitan Opera in New York (Elvira in I Puritani, Gilda in Rigoletto). Olga Peretyatko also performed for more than 600,000 people at Le Concert de Paris, on 14 July 2014 for the Bastille Day celebrations, by the Eiffel Tower as well as at the day of the City Concert in the Palace Square in St Petersburg. Alongside the legendary Placido Domingo, Ms Peretyatko also performed at the Wiener Opernball 2016 and a few moths later sang Violetta- one of her signature roles under his baton at the Mariinsky Theatre.

Ms Peretyatko just finished a successful run of Rigoletto performances at the MET and will return there again in April after performances of Elisir d’amore at the Vienna State Opera and Lucia di Lammermoor at the New National Theatre in Tokyo. She will then make her long awaited debut at the Bolshoi Theatre in Moscow in La Traviata, followed by another highly anticipated debut as Leila in Les Pecheurs de Perles at Staatsoper Berlin.

Outside of Russia and CIS countries, OlgaPeretyatko is represented by CSAM management.