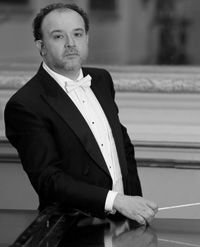 Renato Balsadonna is rapidly becoming a highly acclaimed symphonic and operatic conductor in addition to being already recognised as the most esteemed Chorus Director of his generation. Born in Venice, he first worked as a repetiteur at La Fenice, Venice, and Teatro Verdi, Trieste, before moving on to the post of Assistant Chorus Master in Basel.

He also assisted Nortbert Balatsch at the Bayreuth Festival (1999/2000). Balsadonna then enjoyed a long working relationship with Sir Antonio Pappano, who appointed him Chorus Director at Théâtre Royal de la Monnaie in 1997. Balsadonna later joined Pappano at The Royal Opera House, London, where he was their celebrated Chorus Director from 2004-2016.

Recognised in addition for his considerable gifts as an orchestral conductor, Balsadonna also conducted a number of Main Stage productions at The Royal Opera House, including I due Foscari, The Minotaur and Nabucco. Away from The Royal Opera House, Balsadonna has had successful collaborations with numerous opera houses and orchestras as a guest conductor, including Don Quichotte for Grange Park Opera (2013/2014).

Notable choruses with whom Balsadonna has developed a strong relationship including the Frankfurt Opera Chorus, the BBC Singers, the Netherlands Radio Choir, and the Accademia Nazionale di Santa Cecilia Chorus. As a symphonic conductor, Balsadonna works regularly with the Royal Philharmonic Orchestra, with whom he released a CD in September 2016.

Highlights from his 2015/2016 season include conducting a number of successful performances of Don Carlo and Lucia di Lammermoor (Oper Frankfurt),  La Bohème (Teatro Verdi Trieste) and Nabucco at the Royal Opera House Covent Garden. His highlights in the 2016/2017 season included Tosca (Opera de Nice) and Madame Butterfly (ROH), a London performance with the RPO as well as the Nabucco and Lucrezia Borgia performances at the Mariinsky Theatre in St Petersburg. In 2017/2018 season he received great critical acclaim for his performances of Norma in Nizza, an Opera Gala Concert in Tokyo as well as for Traviata at the Cincinnati Opera. Recently Balsadonna made his successful debut in La Fenice in Venice conducting Madama Butterfly and in Teatro Maestranza in Sevilla with Lucia di Lammermoor, a new production of Don Giovanni in Verona and La Sonnambula at the Teatro Regio di Torino

His upcoming engagements include as well as various concerts in Europe and the US as well as Nabucco and Turandot at Sofia National Opera and a new production of Il Barbiere di Siviglia at Cincinnati Opera as well as Pagliacci at Michigan Opera.