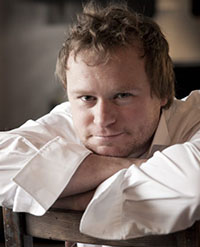 Sergey Skorohodov began his operatic career in 2007, when he joined the the Mariinsky Theatre and nearly immediately became a leading soloist of this theatre, performing on numerous occasions alongside such stars as Anna Netrebko, Olga Borodina and Maria Guleghina.
Under the baton of Maestro Valery Gergiev, Sergey has performed in various theatres and concert halls such as Festspielhaus Baden Baden, the Royal Opera in Stock-holm, Metropolitan Opera in New York, Washington National Opera, Welsh National Opera and others.
After his 2008 debut at the Bolshoi theatre as Grigoriy in Boris Godunov he frequently performed there and subsequently sang this part at the Bayerische Staatsoper in Munich on various occasions.

His recent successes include Vaudemont in Iolanta at the Bolshoi Theatre; Sinowij in a new production of Lady Macbeth of Mzensk at the Bayerische Staatsoper in Munich as well as Verdi’s Requiem at the Philharmonie in Munich, Ariadne auf Naxos with Vladimir Jurowski in Moscow. He received great critical acclaim also for his performances as Vaudemont in Iolanta at the Staatstheater Mannheim as well as for his performances in the title role in Lohengrin in Essen. In March 2019 he finally made his debut at Teatro Alla Scala as Andrey in a new production of Khovanshchina, followed by another fulminant debut as Tannhäuser at the Mariinsky Theatre.

Some upcoming engagements include a role debut as Calaf at the Toronto Opera House, Erik in a new production of Der Fliegende Holländer at the MET, as well as Rodolfo in La Boheme, Don Carlo, Duke of Mantova, Macduff, Alfredo and Cavaradossi at the Mariinsky Theatre and another new production of Khovanshchina at the Staatsoper Berlin.